AIT Project Nexus is a social entrepreneurship project initiated by Hugo Leandersson and Björn Fhager late summer 2012 aiming to produce a platform that would allow rural developing communities in sub-saharan Africa to begin their journey of social, economic and agricultural development. At the core of our offer lies is a photo-voltaic power plant which can supply both onboard facilities and community members with access to green electron, sustainable energy 24/7 without charging a single cent at point of delivery. To realize such an ambitious dream we aim to produce an integrated technological ecosystem including knowledge resources which “teaches a man how to fish” rather than “giving him a fish”.

The core idea is that by diversifying our revenue stream and using frugal innovation, we can deliver a platform for ‘IKEA-style community development’ that quite literally creates new markets for consumers and businesses to grow in. We strongly believe that much of what is shown on the news today about the developing societies paints an unnecessarily dark picture of the true potential of it’s inhabitants and, if only given the right tools, they would quickly be able to improve their living standards and productivity on their own. We believe in “business for good”, and by giving every individual the basic infrastructure and elementary knowledge called for he or she can begin contributing towards global development of sustainable living for all.

At the beginning of the project we presented quite an ambitious task: “To produce a structure with a minimum effective solar panel area of >500m2 that can be manufactured to fit inside standard 40 feet shipping containers and can be deployed without the use of heavy machinery or specialized labour.” We had already conducted several exploratory studies on suitable components and projected size of the unit but as far as the technical design and viable blueprint were concerned we had nothing.

Managing our own expectations was hard as we wanted to get the out of our groups without overloading them with work. Finally, we settled on that the groups should deliver: “a primary concept complete with CAD, basic stress analysis and proven assembly feasibility”. These deliverables were seen by us as the critical factors that needed development for the project to progress.

What was really good about the BTH students was that already in our introduction meeting they took charge of the idea generation process and quickly produced concrete suggestions for how both teams could work in parallel to cover the most ground. A typical concern when working with students is that they could need someone to ‘hold their hand’ through the process, and we had several internal discussions about how we could best support them without hindering their creativity. Amusingly enough, when the project started we realized that many of our management tactics were not needed as the students had a clear sense of priorities and could allocate themselves into the correct roles with great ease.

Instead, we found ourselves in the unexpected situation were the students would come to us with suggestions and ideas that went above and beyond their roles as engineers. Through the entire two months we received relevant, and critical, questions that helped us on the backend refine our product offering in areas such as user-friendliness, theft protection, and logistics. Both groups had regular check-ins with our engineering coordinator where clear progress and decisions made were presented to us. This gave us the ability to ‘look over their shoulders’ to see how the teams were attacking the problem, and what we found was thorough, methodical, and quite frankly brilliant lines of thinking. This helped instill a high level of trust on both sides and helped us release control of the project to the students to let them put their full potential to use. As the project presentations started to draw near, the halls of AIT became filled with ever increasing anticipation of success. 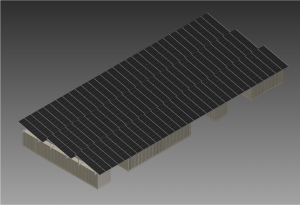 Our project ended in presentations by students at BTH where we got to see both our own teams as well as others present their innovative solutions to the companies. The day started with a product fair where all projects were presented to the public and we could ask questions and network with both students and other companies. From this, we moved on to half-hour presentations from both groups on their concepts and stories of how the project had been for them. For us there was a great deal of positive energy as we were very impressed with the depth and concreteness of the students solutions. We felt that both teams had provided thoughtful input during the development process which could be seen in the final concepts.

Even better was that both groups took the opportunity to give us constructive critique on what information they had missed, and what they would’ve liked to accomplish if they’ve had more time. The students clearly showed a capacity to go beyond the role of engineer students and look at aspects such as comfort for the end users and the appearance of their designs in the sense that they had added components to their designs to make the product appear solid and reliable which is of primary concern to us! We both feel that we’ve made some friends during the course of this project and already know that we will continue to work with them in the future to improve on the original designs.

Thank you for the amazing results so far!