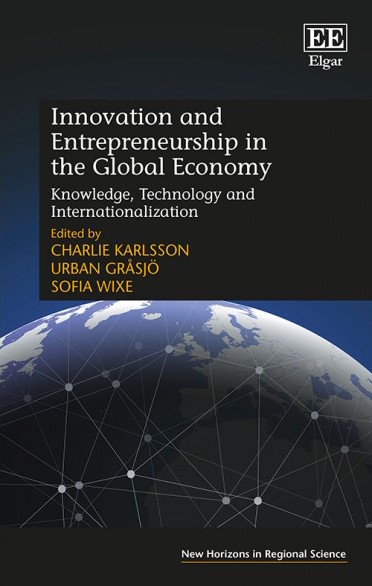 PhD candidate Babak Kianian, Professor Tobias Larsson, together with Sam Tavassoli (of Industrial Economics) will appear in the new book “Innovation and Entrepreneurship in the Global Economy – Knowledge, Technology and Internationalization” from Edward Elgar Publishing. The contribution is entitled “Manufacturing Renaissance: Return of Manufacturing to Western Countries”.

Framing of the book is “We have, in recent decades, been able to witness a veritable revolution in the world economy, known as ‘globalization’. Generally, the term is connected to the rapid increase of the free movement of goods, capital, people, ideas, information and knowledge around the globe. This book contributes to the meso- and micro-economic literature on innovation and entrepreneurship in the global economy.”

The contribution by, Tavassoli, Kianian and Larsson introduces with:

“Twenty-one percent of North American manufacturers reported bringing production back into or closer to North America during the second quarter of 2011 (surveyed by manufacturing sourcing website MFG.com in June 2011). More than one-third of US-based manufacturing executives at companies with sales greater than $1 billion are planning to bring back production to the USA from China or are considering it (BCG, 2012). For example, General Electric (GE) recently announced a $1 billion investment to ‘re-shore’ the manufacturing of its appliances from Chinese plants back to a plant in Kentucky, USA (Crooks, 2012; The Economist, 2013). This is obviously a new trend (The Atlantic, 2012), because from the late 1960s to early 1970s up to recent years, the trend was actually the other way around, that is, western manufacturing had moved extensively to less developed countries (LDCs). As Norton and Rees (1979, p.147) argued, the main reasons behind the original shift to LDCs were ‘the low labor cost and favorable business climates of such LDCs as South Korea and Taiwan’. Vernon (1979, p.266) noted: ‘Although income, market size, and factor cost patterns have converged among the more industrialized countries, a wide gap still separates such countries from many developing [LDCs] areas’.

However, things have changed recently, and this rationale may no longer be true (at least not to the same extent as was the case in the late 1960s to early 1970s). Concerning labor cost, in a recent report Boston Consultancy Group anticipates that the net manufacturing costs in China and the US will converge in 2015 (Sirkin et al., 2011).2 Concerning business milieu, there have been recent and recurrent complaints about IPR (intellectual property rights) problems in China and other Asian emerging economies. A new trend is now being observed that indicates the ‘return’ of manufacturing to western countries, especially to the US (Sirkin et al., 2011; The Economist, 2012; The Atlantic, 2012).

The aim of this chapter is to shed some light on this new pattern of a locational shift of western manufacturing, called in this chapter the ‘manufacturing renaissance’. This will be performed by developing arguments within the context of the PLC (product life cycle) model, while borrowing arguments from transaction cost theory and new economic geography.”